Each week we will spotlight a different DPW artist who will give away one of their best paintings. To enter to win Fu-Hsuan's painting "Restaurant Omnivore in Pau II" go to Daily Paintworks and click on the link at the top of the page announcing their interview. 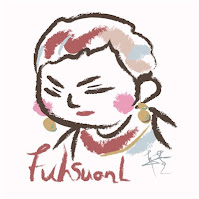 I'm Fu-hsuan, 'noting' things with different materials, presenting what I "received" in colorful drawings. I work principally in oil pastels.

Before I studied and worked in fashion design domain, and now I'm trying something new!

What did you want to be growing up?

Teacher while I was in elementary school, then someone capable of feeling the world in every way.

When did your artistic journey begin?

I am not sure whether it could be called an artistic journey 'cause I have never been trained or followed a typical systematic art class. Let’s call it draw-something journey. It began when I didn’t know how to write my name. In my country (close to Japan), Japanese comic style (characters with giant eyes) was trendy, therefore I drew for around thirteen years giant eye characters with pencil. My mother still keeps one of my drawings (a girl in a sleeve-less top and jeans holding a small purse) - done as a 6 year-old.

Did you have long periods without creative expression? How did you get back on the horse?

I did, while I worked from 9:00 to 19:00, plus two hours of commute and language classes after work till 10pm. In this period I didn't feel eager to create even a quick sketch, literally nothing. After I left, everything got back to normal. It seems to me I'm either always being in a rush and exhausted or being creative, not both.

Which mediums and genres do you gravitate toward? Which ones don’t appeal?

Oil pastels, charcoal, and oil paints, sometimes acrylics, mediums textural. Even better if it’s textural, rough and thick at once, such as oil pastels. Mediums usually used to create a transparent effect, like aquarelle, is not that attractive to me. For genres, it must be Post-Impressionism and Fauvisme where people detach the reality from realistic painting and separate painting from representing what we see by observing/encountering the outside world in multiple ways. I would like to mention the minimal art and conceptual art as well which I appreciate the idea, but for simply the visual side, I personal prefer artwork more pictorial.

What was the process like of pinpointing your personal style or finding your voice?

I started with pencil from don’t know when, till my seventeen-year-old with a Japanese comic style; since college, in fashion design we needed clear and readable illustration, therefore, I switched to fine-liner pens, Staedtler, Uni... in order to accumulate all silhouettes illustrated. Coloring with Copic Markers, and this fine-liner and Copic marker combination has lasted more than ten years until the readability didn't seem to me as important as before - that’s the moment where I needed something more rough, less clear and delicate, such as oil pastel. In other words, I switched to unmodifiable and textural mediums.

Name an artist (or artists), well-known or not, who you admire. Why?

Van Gogh for calling himself too unstable and unrealistic, but painting real objects (such as flowers, people, countryside views) allowed him at least to stay in the connection between himself and the stable outside.

André Derain for his composition of colors and rough traits shown in his paintings during 1904-1907 or even later, 1908, where his style changed radically (though it changes all the time). It seems to me that every part of his paintings (in this period) can stay alive separately but meanwhile their vitality won’t change - even being gathered in one canvas. It’s like a big biscuit is a biscuit, but after being cut in dozens of pieces, these pieces can still stay legitimately biscuits. Not like how a lizard’s tail won’t be alive once it's separated from the body, but more like how one cell separated in two, then four then eight, works perfectly as the first single cell.

If you could offer one piece of advice to your younger, creative self — what would that be?

That pursuing the narrow gap between real and unreal, optique and non-optique would never hurt, it’s the entrance of everything.

Do you utilize any habits or tricks for winning the distraction and procrastination battle?

No, I draw, create and think because I receive from the exterior, no way this transmission from interior to exterior could be stopped even while being isolated in a cave. Therefore this nonstop process of releasing what is received happens naturally as instinct, exactly as if we eat because of hunger, rest because of fatigue, and the ‘distraction’ doesn’t really appear in this situation.

In moments of self-doubt or adversity, how do you push forward?

I don’t have any special tricks, however in my opinion doubt (or self-doubt) is natural also neutral, think-doubt-act are three elements that work reciprocally. As a normal circulation. There is no need to feel uncomfortable (or comfortable) while doubting.

What are some of your long and short term goals for yourself or your art?

Short term goal is to refine the colors in my drawings, sometimes they are way too much. Long term goal is to start a boutique with mixed offerings: a selection of product ceramic, clothing (a minimum), plus a corner studio where I can work on drawings or any kind of creations and display them right on the site where they are created.

What does success mean to you personally?

Being consistent and impartial. All actions and pursuits must present the same coherence.

What is one of your proudest moments in your creative life?

The moment where I finally realized there is no need to deliberately avoid drawing recognizable shape in order to make it look less real, vice versa. A house is a house, whether I agree or not, whether it appears green or pink in my eyes, the existence of this house is absolute, the nature of things won’t change any, what I need to do is to draw while thinking about a house existing independently in its ‘house way’. After this moment, I start hearing some interesting comments, ‘your lines are moving’ or ‘they are alive in your drawing’. I appreciate that people see through drawings and paintings 'cause they are way more than just an image representative of an objet.